Power of the pupils

Our pupils have fantastic ideas that they present to the headteacher to improve our school. Listed below are some of the many great ideas that have made our school an even better place to be!

Fiona wrote me the most beautiful letter requesting the opportunity for her and her friends to have a stall at the Spring Fair to raise money to send to people affected by the fires in Australia. Of course I said yes! 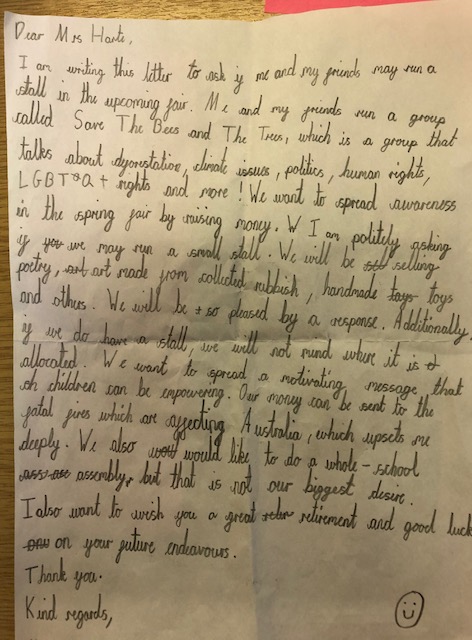 Jessie  was inspired by the Climate Change March and being in the Climate Change after school club,  and last Monday she set up a petition on changeUK to convince Crayola to introduce a felt tip pen recycling scheme in the UK (like they have in the US).
In less than a week she’s had more than 60,000 signatures. Please see link below for the campaign:
http://chng.it/PHJG9mxX

What an achievement - well done Jessie

Our pupils have fantastic ideas that they present to the headteacher to improve our school. Listed below are some of the many great ideas that have made our school an even better place to be!

Klementyna had some issues about recycling and confusion between a book and a video version where children had incorrect information so she wrote this amazing letter to the headteacher! Read her excellent letter and Ms Harte's response here!

Izzy and Jasmine were concerned about the litter being left in the playground so they made a fantastic poster and suggested some more attractive bins for outside. Animal shaped bins have been bought on their recommendations!

A group of boys came to let Ms Harte know that the timetabling was not really working on the football pitch. They felt there were too many children on there at once, and so we redid the timetable to make it safer!

Sonny identified a way to make money for the school by collecting crisp packets from packed lunches. He and Ms Harte bought a bin to go outside to collect the packets!